Below is the Foreward to the Primer on the Absolute Primacy of Christ written by Msgr. Arthur B. Calkins. With the exception of the biographical section on Bl. John Duns Scotus (not posted on this website because there are plenty of biographical sketches on the web and because it is basically a translation of Fr. Diomede Scaramuzzi, OFM, with some additions from the biography written by Fr. Stefano M. Manelli, FI, both of which present details which are controversial and off our subject here), the entire book is posted here on the static pages of the website. In a certain sense posting Msgr. Calkins Foreword is like serving the best wine last – it has been in reserve for this moment!

Foreward to the Primer on the Absolute Primacy of Christ

by Msgr. Arthur B. Calkins 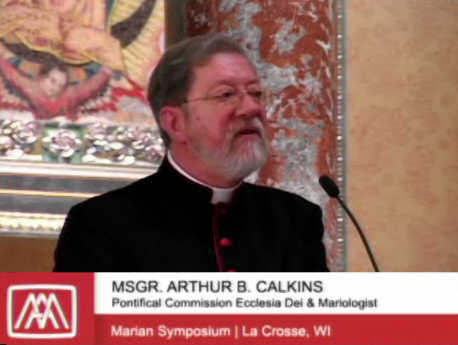 It is a joy and a privilege for me to offer a word of introduction to this little book by Father Maximilian Mary Dean, F.I. for a variety of reasons.  First of all, I am happy to do so because of my close association with the Franciscan Friars of the Immaculate from the very beginnings of their existence as a new religious community sprung from the Marian charism of Saint Francis of Assisi as lived by Saint Maximilian Maria Kolbe and Saint Pio of Pietrelcina.  My relationship with them has been a source of countless blessings for me and has given me an ever greater appreciation of the Franciscan heritage in theology and spirituality which enshrines what Saint Maximilian Kolbe referred to as the “golden thread” of the Immaculate.  Further, and as an integral component of that fundamental Franciscan-Marian charism, I am especially pleased to share my conviction about the inestimable value of the contribution of Blessed John Duns Scotus to Catholic theology and spirituality and hence to the useful introduction to this master with which Father Maximilian Mary has provided us.

I can trace my own attraction to the Subtle Doctor, as Scotus is known, to three specific stages in the course of my own intellectual and spiritual formation besides the on-going influence of the Franciscan Friars of the Immaculate.  The first was my initiation into scotistic studies, even if at a very elementary level, in the mid 1980s through the good offices of Father James McCurry, O.F.M. Conv. and my fascination with the last great work of the late Father Juniper Carol, O.F.M., Why Jesus Christ?[1] which the author kindly autographed for me “with best Scotistic wishes”!  The second was my visit to the tomb of Blessed John Duns Scotus in Cologne after the Mariological Congress at Kevelaer on 21 September 1987 in the company of Father McCurry.  (One must never discount the efficacy of contact with the relics of holy persons.)  I still remember the pithy Latin inscription on the tomb:  Scotia me genuit.  Anglia me docuit.  Gallia me accepit.  Colonia me tenet.  [Scotland gave me birth.  England taught me.  France received me.  Cologne holds me.]  The third was my presence in the Vatican Basilica on 20 March 1993 for the confirmation of the cultus of John Duns Scotus and the beatification of Dina Bélanger, another one of my heavenly friends in whose life the Marian imprint is also very strong.  Because of complex historical vicissitudes, the process of the “equivalent beatification” of Scotus had been arrived at only after the solemn promulgation of the Decree Qui docti fuerint in the presence of the Holy Father on 6 July 1991 which authoritatively affirmed that “The reputation for sanctity and heroic virtues of the Servant of God John Duns Scotus as well as the cultus offered to him from time immemorial are established with certainty.”  (Just as in the case of venerating relics, I believe that there are special graces which come through the intercession of Saints and Blesseds when they are being elevated to the honors of the altar.)

What I arrived at by degrees – and I believe by intervention of divine providence – Father Maximilian Mary has arranged for us in an orderly fashion.  As one meditates on the insights of Scotus – and these can readily serve as the theme of our prayer as well as of our study – one begins to see not only the depths of the Subtle Doctor’s thought, but even more, the depths of God’s divine plan for creation.  For this reason, it is a tragedy that such immense prejudice has been shown to the insights of Scotus in the course of the centuries.  One can more readily understand the animus against him by English Protestants because of his identification with the Catholic doctrine on the Eucharist and loyalty to the Successor of St. Peter (which issued in his name, “dunce,” becoming a synonym for fool) than the incredible bigotry against him which I have personally met in Catholics who seem otherwise to be well educated.  The principal reason for this discrimination among Catholic intellectuals, I fear, should not be attributed to St. Thomas Aquinas, but rather to many of his lesser disciples.[2]

What are Scotus’ insights, then?  The principal ones have to do precisely with Jesus Christ as the absolute center of the created universe and His Mother as next to him in the hierarchy of created being.  They have to do with God’s eternal plan before time began and before his taking into account – we are speaking in a human way here – the reality of man’s fall from grace.  As Father Maximilian points out with great skill, this is precisely the vision which St. Paul communicates in his great Christological hymns found in Ephesians 1:3-10 and Colossians 1:12-20.  It is a marvelously optimistic view of the immensity of God’s goodness and of the role of the created human nature of the Son of God, a vision of creation worthy of being drawn out and substantiated by a spiritual son of the saint who chanted the Canticle of Brother Sun.

It was in fact the bold philosophical thought of Scotus which overcame the objections to Mary’s Immaculate Conception.  God, who could foresee the fruits of the redemption wrought by Christ, could communicate them in advance to the New Eve so that she could collaborate in the redemption of the rest of us.  This is an amazing insight into the divine purposes which Blessed Pius IX codified, so to speak, in Ineffabilis Deus, the Apostolic Constitution proclaiming the Immaculate Conception, by stating that “God, by one and the same decree, had established the origin of Mary and the Incarnation of Divine Wisdom.”  This, in effect, was a confirmation of the thesis sustained by Scotus and his followers for centuries.  The late Pope John Paul II beautifully corroborated this fact in his Marian encyclical Redemptoris Mater by stating of Mary that

In the mystery of Christ she is present even “before the creation of the world,” as the one whom the Father “has chosen” as Mother of his Son in the Incarnation.  And, what is more, together with the Father, the Son has chosen her, entrusting her eternally to the Spirit of holiness.  In an entirely special and exceptional way Mary is united to Christ, and similarly she is eternally loved in this “beloved Son,” this Son who is of one being with the Father, in whom is concentrated all the “glory of grace” [Redemptoris Mater #8]

In this vision Jesus and Mary are part of God’s eternal plan as the crown of creation even before the prevision of original sin.  True, they are not on the same level because Jesus is the God-man whereas Mary is only a human creature, but a creature unlike any other.  The attentive reader will note that Father Maximilian draws out the unique mediatorial role of Mary – always subordinate to that of Jesus – which, in this line of thought, anticipates her role in the distribution of graces deriving from her unique function in the working out of our redemption.

Meditating on these mysteries of faith over the years, I have become a convinced Scotist with regard to the motive of the Incarnation, the Immaculate Conception and the absolute primacy of Christ from which Mary’s “subordinate primacy” cannot be separated.  At least on the mystery of the Immaculate Conception, St. Thomas’ followers have had to concede the point after the solemn definition of the doctrine in 1854, although probably most of them would continue to put up stiff resistance on the other two matters.  Nonetheless I continue to believe that these points, so faithfully attested to by Blessed John Duns Scotus and his disciples and so admirably elucidated by Father Maximilian in this little book, are not simply the intellectual heritage of Franciscans, but belong to all Christians because they are the teaching that comes to us from the Word of God.