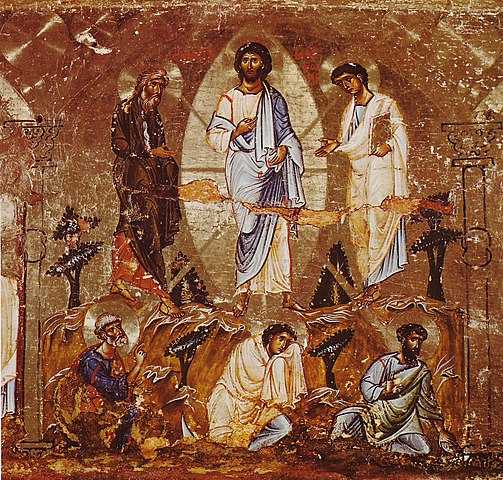 On August 6th, the Church solemnly celebrates the Transfiguration of Our Lord on Mount Tabor. In this feast God the Father, Son and Spirit reveal the glory of Christ the King in all His splendor to the Church and through the Church to the world. The Church is represented by the Apostles Peter, James and John, and after Christ’s Resurrection their message goes out to all the world.

The Transfiguration is a micro-revelation, if I can coin the term, of God’s creative design. God willed first and foremost to exalt a created nature to the highest possible grace and glory, namely the grace and glory of the hypostatic union whereby the humanity of Christ was predestined and elevated into the fullest participation possible of the divine, intratrinitarian life. This glory shines forth undimmed in the Transfiguration with the witness of the Law (Moses) and the Prophets (Elias) and the Church (the Apostles). The glory of the humanity of Christ consists in being the Son of the Father: “This is My beloved Son, in whom I am well pleased; hear Him” (Mt 17:5); the Word made flesh and thus the Light of men (cfr. Jn 1:4,14): He “was transfigured before them. And His face shone as the sun, and His garments became white as snow” (Mt 17:2-3); and the glorious work of the Holy Spirit represented by the “bright cloud” which overshadowed the mountain (v.5; cfr. Lk 1:35; Mt 3:16-17). In a word, Jesus Christ is the Masterpiece of the God’s creation – what Bl. John Duns Scotus calls the summum opus Dei.

While God could have created the humanity of Christ directly out of nothing, or formed it from the dust of the earth as he did Adam, He freely chose that Christ be factum ex muliere – “born of a woman” (Gal 4:4). In other words, in willing the Incarnation God also willed the Divine Maternity. The Blessed Virgin Mary was thus predestined to be the Mother of God in the same decree that willed the Incarnation. With Christ the King of creation there is also Mary the Queen of creation. Two Hearts, one divine plan.

It also pleased God to create Angels and men and predestine the elect to participate in the grace and glory of Christ even before the creation of the world (cfr. Eph 1:4). Thus per ipsum, cum ipso et in ipso – through Him, with Him and in Him all the Angels and Saints can give glory to God in the Holy Spirit. Christ is that one Mediator between God and creation who, by the divine decree, stands at the center, the heart of all of creation as “the way, the truth and the life” (Jn 14:6). Apart from Him, no one can know or come to the Father.

For the Angels the test was definitive because, being pure spirits, their test was not in the context of space and time. Shown the vision of Jesus and Mary, their King and Queen, they were called to worship Christ the King and submit to Mary the Queen. St. Michael’s response was one of wonder and awe: “Who is like God?”, whereas Satan responded, “Non serviam – I will not serve.” For the fallen angels there could be no Redemption because of the definitive nature of their free choice, their free, definitive rejection of the grace of Christ.

For men, however, the test was and is in the context of time and space. Thanks to God’s mercy, there is the possibility to change, to repent. According to St. Jerome’s commentary on Ephesians 5 (and St. Thomas Aquinas confirms the tradition in his Summa II-II, Q.2, art.7  and Summa III, Q.1, art.3) Adam knew of God’s plan to recapitulate all things in Christ, the Incarnate Word, when God put him into the mystic slumber and created Eve. Yes, before the fall, Adam and Eve knew of the Incarnation. This would indicate that the sin of Adam and Eve was, in a certain sense, not just a random disobedience, but a choice not to second God’s plan in Christ. In other words, the tempter led them to seek being like gods apart from Christ instead of seeking to be children of God and to enter into the Trinitarian life in Christ and through His mediation.

Sin did not change God’s plan in its substance. If Adam had not sinned, Christ would have come just the same to glorify God perfectly ad extra and to lead all creation back to its Creator as its Mediator and great High Priest. What sin did was to create a wall, so to speak, between man and God. Man had freely removed himself from God’s plan. God in His mercy wills the remedy: Christ will sacrifice Himself on our behalf and remove the wall that separated us from God and one another. This, however, requires our cooperation with His grace; this requires a response to His Divine Mercy. Man must repent of his wicked ways and acknowledge (in word and deed) Christ the glorious King.

Let us then follow the Church’s lead, let us acknowledge and adore Christ the Supreme King of Glory, as she sings in the Divine Office: Summum Regem gloriae, Christum adoremus!